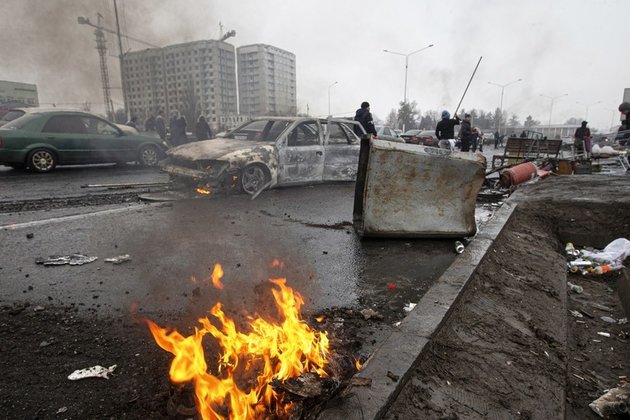 At least 225 people, including 19 police officers and military servicemen, died in the recent violent unrest in Kazakhstan, the country's prosecutors have said. More than 4,500 others were reportedly injured.

The updated statistics relating to the wave of protest that gripped the country in early January were revealed by the Kazakh authorities on Saturday. A spokesman for the Prosecutor General's office stated during a press conference that at least 225 people had been killed. That figure includes police and military personnel, as well as civilians and those whom the government has described as "bandits."

During several days of violence, 4,578 people were injured, the official said, adding that among that number were nearly 3,400 law enforcement officers and soldiers.

The vast majority of those who perished during the unrest - 175 in total - died in the country's hospitals, a spokeswoman for the Health Ministry revealed at the press conference.

More than 20,000 people took part in the violent unrest, according to prosecutors, with some 546 criminal cases having been opened in the aftermath. Of those, 44 are said to be related to terrorism and 19 to murder. So far, law enforcement agents have detained nearly 700 suspects, with 446 of them having already appeared in court and been detained pending trial.

The protests were triggered by a sharp hike in fuel prices at the start of this year. While they began as peaceful demonstrations, the events soon became dominated by groups of looters, arsonists, and, according to Kazakh authorities, armed attackers, who took to destroying administrative buildings and the offices of media corporations, ransacking businesses, and reportedly attempting to storm police headquarters and military barracks to obtain more weapons.

The violence soon spread to cities across the country, with the streets and even the airport of the largest metropolis, Almaty - informally known as the southern capital - being temporarily overrun by rioters.

There have been claims from Kazakh officials that up to 20,000 "terrorists" took park in the violence. However, no evidence has been offered to support this figure, and claims that the assailants could have broken into morgues to steal the bodies of their comrades and "cover their tracks" were met with derision by analysts.

The five-nation peacekeeping force began its withdrawal on Thursday. On Saturday, the Russian Defense Ministry said 10 military transport planes with Russian peacekeepers aboard had already returned home. All CSTO troops are expected to leave Kazakhstan within two weeks.