Property vandalised amid tensions between SAA pilots over strike 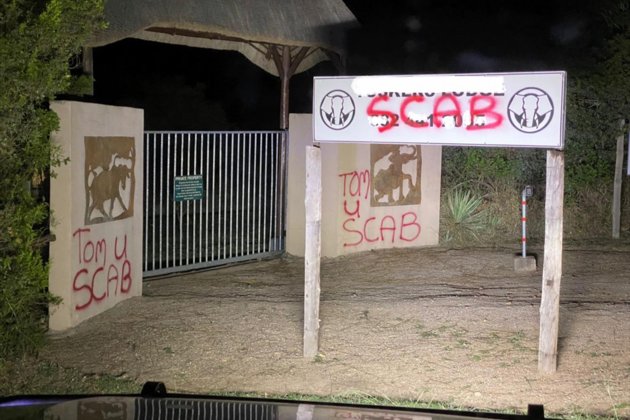 A property owned by a relative of a training pilot in full-time employ of South African Airways (SAA) has been vandalised in the Eastern Cape, as tensions between pilots at the airline seem to reach breaking point.

The phrase "Tom u scab" was recently spray painted all over the signboard and entrance of a safari lodge in the Eastern Cape, ostensibly targeted at the brother of the owner. The owner confirmed the incident to Fin24 this week, but his brother - a pilot at SAA - did not want to comment. There is as yet no proof of who did it and an investigation is continuing. A property owned by a family member of a SAA trainee pilot has been vandalised as tensions between locked-out pilots, and those who are still working, boils over.

The SAA Pilots' Association (SAAPA) - which represents nearly 90% of the pilots at SAA - has been locked out since mid-December last year. A lockout means an employer is not obliged to pay their salaries and it is an attempt by the airline to get SAAPA to agree to cancel its long-standing regulating agreement and accept new terms of employment.

While still locked out, SAAPA members also declared a strike earlier this year to prevent a situation where the company lifts the lockout only for some pilots, especially training pilots, who are needed to get SAA back in the air again.

A representative of the National Transport Movement (NTM) Pilots Forum - mainly consisting of pilots who left SAAPA - condemned the graffiti incident. The forum claims more than one of its members "have been threatened by individuals who have shown no intention of cooperating with SAA".

"Numerous threats have been made, some including the blacklisting of our members and trainers, even if they were to seek employment at any airline worldwide. We find this behaviour appalling and hope our government and SAA will investigate further. We cannot stand by and tolerate such behaviour, least of all during a month when so many young people paid the ultimate price, in the quest for a transformed and equal South Africa," the forum stated on Tuesday.

SAAPA responded to Fin24 that it does not want to comment on the decision of any individual pilot or member to leave the association or to cross the picket line in the union's current fight with SAA.

"We firmly and strongly believe in freedom of association. Whilst this incident of vandalism has nothing to do with SAAPA, we nonetheless do not condone any such actions and would condemn this or any similar behaviour if perpetrated by one of our members," SAAPA said.

SAA itself has indicated that it will not comment on the graffiti incident. SAA interim CEO Thomas Kgokolo has acknowledged in the past that the restart of the airline is contingent on ongoing negotiations with SAAPA to try and reach an agreement.

Towards the end of May this year, the Labour Court in Johannesburg dismissed an interim application by SAAPA, which sought to prevent the state-owned airline from using so-called "scab labour" in their absence. The main case is set to be heard next week.

For training purposes, SAA claims it is using pilots whose lock-out conditions had been lifted or who had never been locked out in the first place. The Labour Court found that SAA has a right to prepare to kick off operations and it would suffer greater harm if interim relief were granted to SAAPA.

The regulating agreement - which dates from 1988 - has for many years been a bone of contention between SAAPA and SAA. It governs the pilots' terms and conditions of employment, and SAA has argued that it is needlessly onerous given the airline's precarious financial position.

SAA and the department of public enterprise (DPE) have also indicated in the past that, in their view, SAAPA's regulating agreement would make SAA less attractive to a potential strategic equity partner. Such a strategic equity partner is key for the success of a "new SAA" since government has indicated it is unlikely to provide the airline with even more bailouts in future.

Recent private arbitration proceedings found that the regulation agreement could not be terminated just on notice by SAA, unless explicitly rescinded by a subsequent agreement. It also found that SAA is liable not only to pay the outstanding salaries of members of SAAPA for the period of 1 June to 18 December 2020, but also claims in terms of meal allowances from before the airline went into business rescue.

The outcome of the arbitration ruling implies that SAA is now legally obliged to prioritise the payment of SAAPA's claims.

Central to SAAPA's demands were that SAA must agree that the Regulating Agreement should only be terminated on the date on which the last of its members leave the employ of SAA pursuant to a retrenchment process. SAA must also pay all its members who are to be retrenched three months' remuneration in lieu of notice.

SAA was in business rescue from December 2019 to April 2021. In the medium-term budget policy statement in October last year, R10.5 billion was allocated to SAA to implement its business rescue plan. Of this money, Parliament is in the process of approving R2.7 billion to be channelled to SAA's struggling subsidiaries Mango, SAA Technical and AirChefs.

Public Enterprises Minister Pravin Gordhan recently told Parliament during his department's 2021 budget vote that, on top of being targeted by the architects of state capture, SAA was rocked by the fact that the global aviation is battered by Covid-19 with airlines facing an estimated a 66% reduction in air travel in 2020. He said the aim is to create a viable airline, not depending on the fiscus, with the agility to cope with uncertain times. Obtaining a strategic equity partner will play a key role.

The revamped SAA is more likely to take to the skies in August, Gordhan told Parliament's portfolio committee on public enterprises last week. The minister said a strategic equity partner was on the horizon with the understanding that taxpayers would not be coughing up for any further bailouts.